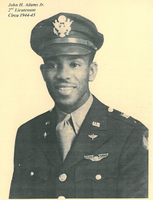 Born in Hiawatha, Kansas, Mr. Adams grew up in Kansas City, Kansas where he was working as a motion picture projectionist when he was called to service in 1942. He gives a detailed account of what he experienced during his induction at Fort Leavenworth, Kansas and basic training at Jefferson Barracks, Missouri. Afterwards, he was assigned to attend school at the Franklin Technical Institute in Boston, Massachusetts for training in General and Topographic drafting. He recalls some of his academic and social experiences during his course work in Boston. Having graduated with high honors from the Institute, he explains what his assignment to an aviation engineering group at March Field, California was like and how instead of going with his military unit overseas, he ended up being accepted to Tuskegee’s cadet pilot training program, in 1943, for a “…possible future as a pilot, bombardier, or navigator with the 332nd Fight Group.” He provides a detailed account of his preliminary and advanced training experiences with the B13, At6 and P47’s, which includes a time when he lost his way flying at night and another time he mistakenly landed on an airstrip where only white cadets were training. But, the war ended before he was sent overseas. After returning home, Mr. Adams worked for the U.S. Postal Service, earned an M.A. degree from the Kansas City Art Institute and became known for his talent as a portrait painter.